A History of Lawrance’s Bakery

An old bakery was operating here in the early part of the 20th Century and run by the Lilley family who where also corn and seed merchants. It was then run by various other bakers until Les Lawrance took over the bakery from a Mr E.W. Dyer in 1954 after having worked in a London flour mill shortly after the Second World War. Les Lawrance then ran the bakery with his sons Peter & John. They then took over the business retaining as many of the traditional methods as possible.

The Pershore shop (the Uppercrust) was acquired in 1974. In 1995 a branch was opened in Cheltenham which also had a considerable wholesale side of the business which supplied customers as far and wide as Oxford, Banbury & Stratford upon Avon. Wholesale is still a very active part of the business supplying shops, pubs, hotels & restaurants. Changes have taken place with modern ovens, machinery, shop presentation and a much more acceptable working environment. Many of our ‘world famous’ products such as the delicious savouries, pastys, lardy’s etc. are still being produced by us today. 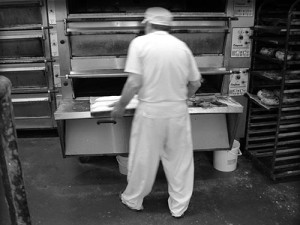